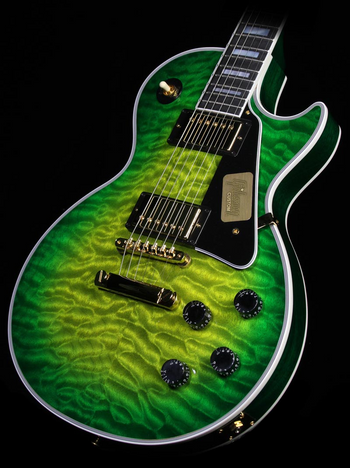 Jeff's first electric guitar was a sparkle green Framus he acquired while a student at the International School of Geneva, Switzerland. He still has the guitar, but the green sparkle veneer separated from the guitar's body long ago, leaving Jeff without a green guitar. Clearly, this was an intolerable situation. This Gibson Les Paul Custom, in an unusual Iguanaburst finish, is the spiritual successor to that Framus. From Gibson's Custom Shop, it features a quilted maple top and CustomBucker pickups, along with a split-diamond headstock inlay. 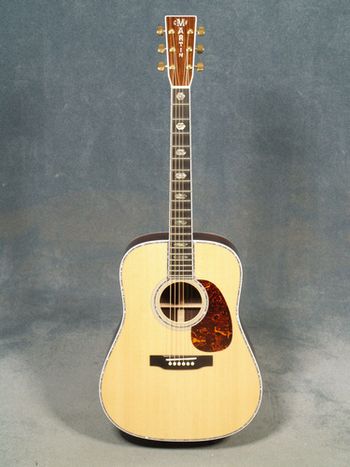 Jeff's Martin D-45. In 1933, country singer Gene Autry approached Martin with a special request – he wanted a guitar like his hero Jimmie Rodgers’ small-bodied 000-45, but with the larger, Dreadnought body style. This resulted in the first D-45, an ultra-swanky guitar with intricate abalone trim and Autry’s name inlaid in pearl script on the fretboard. The D-45 proved too expensive to manufacture, and it was temporarily discontinued in 1942; only 91 had been made. Pre-war versions are the most desirable of all flat tops, currently valued from $250,000 to $400,000. Vintage Guitar Magazine has said, "in the minds of guitar aficionados,[it] remains the epitome of acoustic guitar design". Other notable D-45 players include Neil Young, Stephen Stills, and David Crosby . 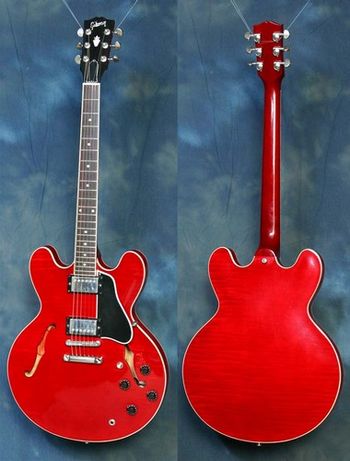 Jeff's Gibson ES-335 Dot Guitar...developed in 1958 to combine the best features of both traditional hollow-body and solid body electric guitars, the ES-335 (the "ES" stands for "Electric Spanish") features a solid maple block in the center of the body to reduce feedback. Fitted with two humbucking pickups, the ES-335 can be heard on countless rock, blues, and jazz recordings. Eric Clapton used a ES-335 with the Yardbirds, Cream and Blind Faith. Alvin Lee of Ten Years After, Justin Hayward of the Moody Blues, B. B. King, Eric Johnson, Otis Rush, Roy Orbison, and many others also use the ES-335. 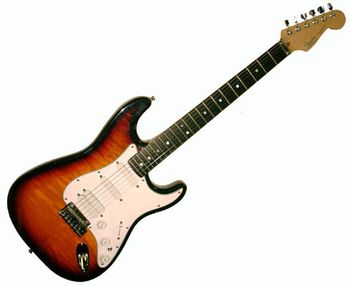 Jeff's Fender Ultra Strat....The first Fender Stratocaster appeared in 1954, and dozens of variations of that model have appeared since. The Strat Ultra is no longer being manufactured, but when it was being produced in the early 1990's (Jeff bought his on November 1, 1991), it was designed the be the ultimate expression of this classic rock guitar. Accordingly, it was fitted with a number of unusual premium features not found on lesser Stratocaster models. Among these are Fender Lace Sensor pickups: a Blue model in the neck position, a Gold model as the middle pick-up, and dual Red Lace Sensors in the bridge position. Each of these pickups has a different tonal character. A dual Sensor switch allows either or both Red pickups to be selected, while a special Master TBX tone controls alter the frequency response of the pickups, filtering high frequencies in one direction, and adding presence and brightness in the other. The guitar's neck features a ebony fingerboard with a Wilkinson roller nut to reduce string breakage when using the Deluxe American Standard tremolo. Locking Schaller tuners positively lock the string to the tuning post. The many guitarists who are known for their association with the Stratocaster include Jimi Hendrix, Jeff Beck, Robert Cray, Eric Clapton, Stevie Ray Vaughn, Mark Knopfler of Dire Straights, Jeff of Engine14, Buddy Holly, Hank Marvin of the Shadows, David Gilmour of Pink Floyd, Paul Rodgers of Free and Bad Company, and Carl Wilson of the Beach Boys.

As a solo performer, Jeff frequently plays a Martin OMC-Aura electric-acoustic guitar. It features a 000-size cutaway body, with a 14 fret neck, a top made of solid Sitka spruce, and solid rosewood back and sides. Abalone pearl neck and body inlays are in the top-of-the-line 45-series style, and the gold tuners feature ebony buttons. This guitar is optimized for live performance, with a built-in Fishman Aura electronics package. This system precisely emulates the sound of six selectable high-end studio recording microphones, which can be blended in any proportion with a conventional under-saddle piezo pickup.

When an acoustic guitar sound is called for, but heat, cold, or humidity extremes make it imprudent to bring out a traditional wood instrument, Jeff selects a JM1000 by RainSong. It is made of carbon fiber,and features mother-of-pearl shark inlays on the neck, and an abalone rosette around the fingerboard. Borrowed from the Rainsong website: "How do you describe RainSong's JM? Three words: loud, loud, and loud. And if that's not enough, it's also loud. This is the largest body RainSong builds. The sheer size, combined with the attributes of Projection Tuned Layering™ make the JM one of the loudest acoustic guitars on the planet. This guitar is loud. We had to say it again. But the JM is not just about power. The narrow waist and some layering refinements specific to the Jumbo soundboard give the JM some real fingerstyle grace. The guitar is strong, but impeccably balanced, with bass, mids and trebles distinct, clear and, dare we say it again, loud." No body braces, no soundboard braces, no truss rod....this thing is ready to launch into space and survive re-entry into the atmosphere! It does come with electronics (RainSong Element On-Board System by L.R. Baggs) - you can hear it at a E14 gig soon! 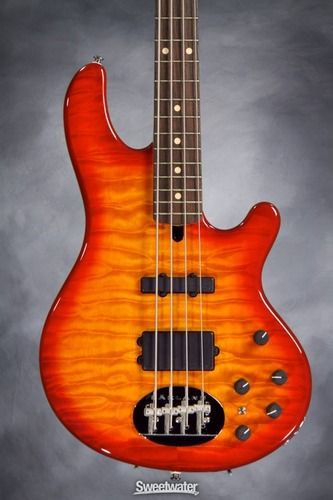 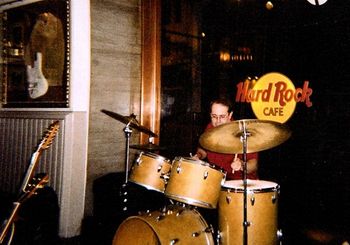 Here's Rob, pounding on his Slingerland set with Engine14 at the Hard Rock Café in Washington, D.C. Rob's Slingerland has served him well for many years. He uses a 22” medium ride cymbal which is a superb all-around ride and provides a great mid-range pitch. Rob uses a Pearl P2000C Eliminator Chain Drive Bass Drum Pedal.

For that 60's sound, Jeff uses a Guild Starfire II semi-hollowbody bass. The iconic semi-hollow bass first debuted in 1967 where it was used by artists like Jefferson Airplane’s Jack Casady, Chris Hillman of The Byrds, and the Grateful Dead’s Phil Lesh. 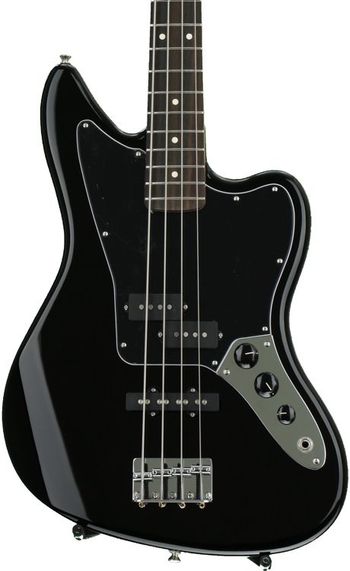